Luxury
On Apr 14, 2021
Share
Oris’s professional diver’s watch, the AquisPro Date, is the latest watch to be equipped with Oris’s in-house Calibre 400 movement. Boasting elevated levels of anti-magnetism, superior accuracy compared to a chronometer, a five-day power reserve and a 10-year guarantee, Calibre 400 is the new standard in Swiss Made automatic mechanical movements. The AquisPro Date is a natural home for Oris’s high-performance Calibre 400. Designed to serve professional divers on saturation dives, it’s a highly technical tool watch chosen by divers who work on complex engineering projects in helium-enriched environments hundreds of meters below the water’s surface. 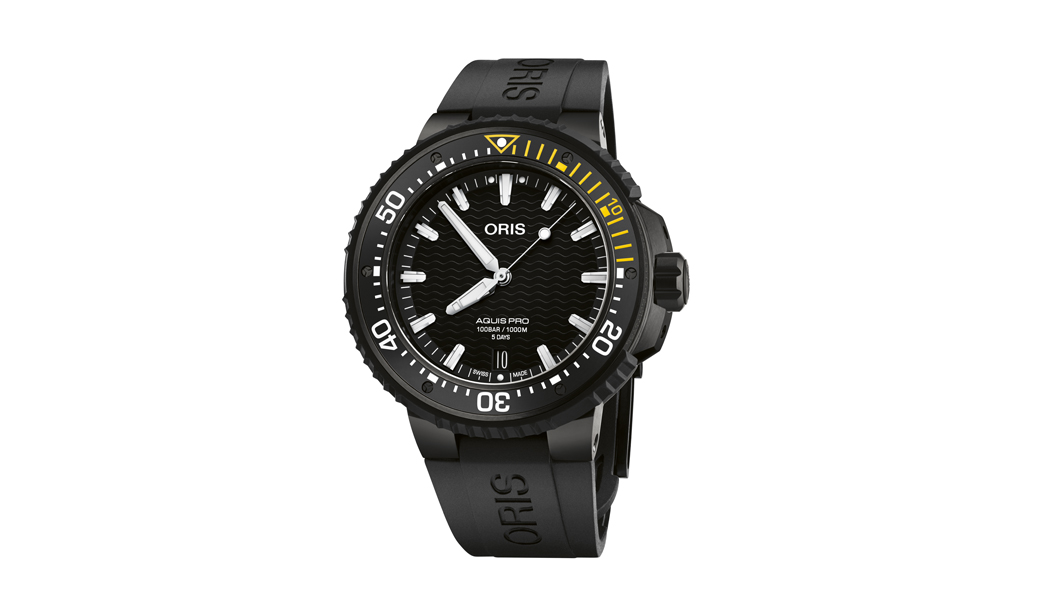 Among its special features is Oris’s patented Rotation Safety System, known as RSS. This exclusive Oris device, commissioned by the professional diving community, enables the wearer to adjust and lock the uni-directional rotating bezel into place. This means that during a dive they can read off remaining dive time with absolute certainty. A chunky rubber grip makes it easy to operate, even when gloved, while a yellow and white minutes scale engraved into the scratch-resistant ceramic bezel insert delivers high levels of low-light legibility.

The new AquisPro Date Calibre 400’s spec list continues with a high-grade, lightweight titanium case plated in low-glare black DLC that makes its 49.50 mm case diameter extremely comfortable on the wrist. Titanium is also used for the rubber strap’s folding clasp, where you’ll find two more exclusive Oris innovations. The patented Oris Sliding Sledge Clasp can be adjusted to very fine tolerances without taking the watch off, so that when getting in or out of even the thickest wetsuit, you can loosen or tighten the strap hassle-free.
The rubber strap also features the Oris Safety Anchor, developed by Oris so that in the event the clasp is released unintentionally, two hooks grab the strap so the watch stays attached to the wearer’s wrist. Innovations such as these have made the AquisPro a long-standing favorite with professional divers. Oris’s independence creates the freedom to develop and engineer high-performance movements and devices such as those found on the AquisPro Date Calibre 400. The new watch becomes one of the highest spec Swiss Made mechanical diver’s watches ever produced.
Oris Calibre 400 sets The New Standard in mechanical watchmaking. Conceived entirely in-house by the independent Swiss watch company’s skilled engineers, it has a five-day power reserve, elevated levels of anti-magnetism, and comes with a 10-year warranty and 10-year recommended service intervals. Here’s how it works. When a standard mechanical watch is laid down for a day or two, it will stop as the power reserve runs down. Calibre 400 has a five-day power reserve, so it’ll still be running if it’s not been worn between, say, Thursday and Tuesday. It delivers this longer period of use via twin barrels, both of which house an extended mainspring, each long enough to store two-and-a-half days of power.
One of Oris’s fundamental ambitions with Calibre 400 was to eliminate problems before they occur. Oris’s engineers identified that one of the most frequent issues with automatic mechanical movements concerns the ball-bearing system that allows the free-spinning oscillating weight (or rotor) to rotate. This is a critical element of an automatic watch – as the rotor spins, it generates power that’s stored in the mainspring, which is housed in the barrel. So we removed the ball bearing altogether and replaced it with a low-friction slide bearing system, in which a metal stud runs through a lubricated sleeve. This is much less complex, highly efficient, and involves far less wear and tear, making it less prone to breakdowns.
Oris is so confident in the performance of the advanced technologies integrated into Calibre 400 that we are offering a 10-year warranty on all Oris watches powered by the new movement once registered with MyOris. In addition, Oris is also proposing 10-year recommended service intervals on Calibre 400 watches. This means that barring accidental damage or water-resistance checks, a Calibre 400 watch won’t need servicing until 2030 at the earliest. This is The New Standard.
Share

Ramadan treat for lovers of gourmet chocolates from La Lu